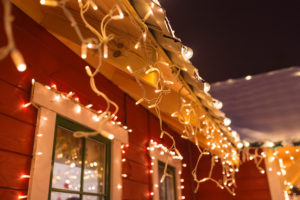 Baxter, MN—The City of Baxter is hosting a holiday lighting contest this year in an effort to bring some positive light and energy to the community this holiday season. The contest is open to all Baxter residents, including apartments and condos as long as they abide by the rules and regulations of their living association. Homes or residences in the contest may be photographed or their holiday display included in a Dispatch video. Contest entries are due to the Brainerd Dispatch by Dec. 10.

Prizes include a credit on the January residential energy bill of the entrants. First prize is a $100 credit, second prize is a $75 credit, and third prize is a $50 credit. Prizes are being sponsored by Crow Wing Power.

Contest entries will be judged by an anonymous committee on a point system as they view the entry via curbside. Categories for judging are: first impression — 25 points, design — 20 points, and originality — 20 points.

Those interested in entering the contest, should mail their information to the Brainerd Dispatch, P.O. Box 974, Brainerd, MN 56401, email newstips@brainerddispatch.com, or drop their information — name, address and contact information with Baxter Lighting Contest noted — in the Dispatch drop box, which is accessed by the alleyway next to the building at 506 James St.