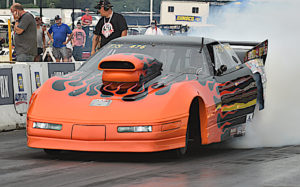 Some of the country’s best Sportsman drag racers will descend on Brainerd International Raceway this weekend for Thunder at the Lakes, but the Winner’s Circle has a history of filling up with Minnesota racers.

Last year was a good example. Seven of the 12 winners – plus all three Junior Dragster winners – were from Minnesota. Most of them consider BIR their home track, showing how strong the amateur drag racing program in Minnesota is.

Thunder at the Lakes is part of the NHRA’s Lucas Oil Drag Racing Series in the West Central Division, which stretches from Wyoming to Wisconsin and from Colorado to Kansas, including part of Canada. Thunder is one of 44 series races across the country this season. Drivers are battling for series points leading to divisional and national championships as well as a chance at a share of a year-end purse totaling more than $500,000.

The weekend kicks off with a Test & Tune starting at 11 a.m. Friday, followed by qualifying and time trials starting at 9 a.m. Saturday. Qualifying rounds for Top Sportsman, Top Dragster and Comp Eliminator start at 11 a.m., 2 p.m. and 5 p.m. On Sunday, elimination rounds start at 9 a.m.

In addition to showcasing some top-shelf drag racing, Thunder at the Lakes also signals the start of MegaWeek. Fans can buy tickets for Thunder and then stay all week through the Lucas Oil NHRA Nationals, Aug. 15-18. Most of the drivers who will be racing this weekend will also be racing at Nationals. There are ticket and camping packages that start this Thursday and extend through Monday, Aug. 19.

Daily admission for Thunder at the Lakes is $25, but a three-day ticket is $50. Kids 12 and under are free, and parking is free.