brainerd-editor
This event has passed. 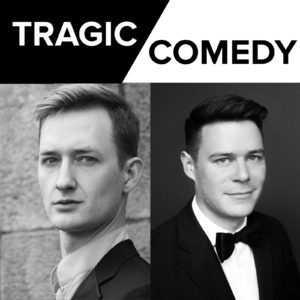 On Sunday, January 5, the Lakes Area Music Festival will continue its 2019/20 Winter Series featuring artistic directors John Taylor Ward (baritone) and Scott Lykins (piano) in a vocal recital titled “Tragic Comedy.” The event will be held at Lutheran Church of the Cross in Nisswa. No tickets required; donations to the Festival encouraged in lieu of ticket fees.

The music to be performed will hit the highest highs and lowest lows, with everything from heartfelt serenades to silly standards. Opening with selections from Gustav Mahler’s tragic and heartfelt Kindertotenlieder, the program will continue to two sets of ‘Songs of Don Quixote’ by French composers Jacques Ibert and Maurice Ravel. Several short songs by American composer Charles Ives will end the program, alongside silly American standards and musical theater selections.

The duo founded the Lakes Area Music Festival as undergraduate students at the Eastman School of Music, Rochester, NY, and has performed together across the United States and Europe over the past decade.

Each summer the Lakes Area Music Festival brings 200 all-star artists from top orchestras and opera companies around the world to perform three weeks of classical music performances in the Brainerd Lakes Area. From chamber music and symphonic orchestra, to productions of opera and ballet, and drawing thousands of attendees each year, LAMF has become one of the most significant summertime destinations for classical music in the Midwest. The 2020 Festival will take place July 31 through August 23, with season details to be announced early March. For more information about the Lakes Area Music Festival, visit lakesareamusic.org.