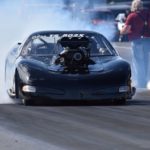 Photo is of Chris Willemssen, who’s contending for a series championship in the Muscle Car Series’ Outlaw Pro Mod class.

BIR’s dragstrip will host as many as 500 cars this weekend for the finale of the three-race Muscle Car Series, a three-day slugfest with series championships on the line in 13 classes. While the drag racers are battling a quarter mile at a time, the Central Roadracing Association will be on the road course for high-flying Superbike racing. Saturday’s lineup includes a classic car show and live music by cover band Rock Godz.

The Muscle Car Series is reserved for door-slammer cars only, no dragsters, bikes or snowmobiles. And the cars, for the most part, are American Muscle classics: Mustangs, Camaros, Chevelles, GTOs, Corvettes, etc. Most are show-ready beauties that also have giant horsepower under the hood, so if you’re a sucker for Muscle Cars, BIR is the place to be this weekend.

On the dragstrip, the seven Heads-Up Classes take centerstage. It’s old-school drag racing where the cars leave at the same time, and the one that reaches the finish line first wins. Times can be 6-7 seconds with speeds over 200 mph. Time trials and qualifying are Friday and Saturday, starting at 9 a.m. On Sunday, eliminations start at 9 a.m. The race also highlights 10 Index classes, the winners of which have a separate run-off to crown the Index Class Champion. Three Strip Eliminator classes, Truck Eliminator and Manual Transmission class round out the schedule.

Over on the road course, the CRA has a busy three-day schedule of Superbike racing that features some of the best riders in the Midwest. Riders will be challenging themselves and their bikes on BIR’s highly technical 13-turn, 2.5-mile road course. It’s the fourth of five weekends of racing for the CRA at BIR, and this year’s competition has been fierce.

“The Muscle Car Shootout has been a great family tradition at BIR for three decades, and always showcases some crazy fun drag racing and Superbike racing,” BIR owner Kristi Copham said. “It’s a great way to cap off the summer. The pits are open so fans can check out some gorgeous cars and meet the drivers.”

Daily admission is $30, and kids 12 and under are free. Parking is free and camping is free, too, with a multi-day ticket. Gates open daily at 7 a.m.