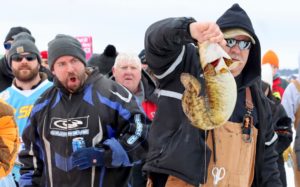 Brainerd, MN—A Sauk Rapids man took home a new pickup truck after catching an 8.29 pound eelpout to win the 2020 Brainerd Jaycees $150,000 Ice Fishing Extravaganza. It took less than half an hour after the noon start for Arnold to reel in the prize-winning fish from the outside edge of the contest area in about 8-9 feet of water with a shiner on his line, “I saw it fall, picked it up, set it, and it was fun,” Arnold said.

Coming from Sauk Rapids, which is about 60 miles south of Brainerd, Arnold said he’s known about the contest for a while and just decided to try it out with a friend this year. That was a fortunate decision for the man who has never ice fished before. As a kayak angler, Arnold said he caught his first muskie this year, his biggest pike and now on the ice, his biggest fish yet.

Coming in second place was Gregory Silkey of Monticello with a 3.58 pound walleye, which also earned him the Catch of the Day prize package consisting of an Ice Castle fish house, Aqua-Vu underwater camera, StrikeMaster ice auger, $500 cash, Vexilar ice fishing system and a $250 Fleet Farm gift card. For second place, he won a 2020 Polaris Sportsman All Terrain Vehicle.

Hailed as the largest charitable ice fishing contest in the world, the Brainerd Jaycees Ice Fishing Extravaganza draws thousands annually from all over and now doles out more than $200,000 in prizes, including a pickup truck, ATVs, ice houses, ice augers, cash prizes and much more.

All proceeds from the volunteer-driven event go to about 45 area charities, primarily the Confidence Learning Center, which provides outdoor activities for people with developmental and physical disabilities. Since the event began in 1991, it has raised $3.3 million for local charities.